Being a born and raised Cajun, I opted to attend Dorothy Morrison and Jackie Smith's Swamp Witchery class.  As I did not know what the ladies had in store for their workshop, it had nothing to do with the swamp and what I personally consider to be "Swamp Witchery".  It was more about using things that you have on hand and not spending alot of money for a specific herb in a specific spell.  Being more flexible with what you have on hand (which is something I already do). It was more like "Swap" than "Swamp". It seemed to be a combination of each ladies' past workshops from past years along with some new information as well.  As always both ladies were charming in their mannerisms and could hold the audiences attention to its fullest extent.  I did enjoy the class very much.

The next class I attended was Christopher Penczak's Descent of the Goddess.  I really REALLY enjoyed this class!  I liked the fact that he took his turn on the tale and compared it to other religions, paths and examples from being an Alchemist to a baker making bread.  The only thing I did not like about his class was something that Christopher has no controll over, his magical voice as able to send people into deep meditation (just listen to his many discs in the Temple series) sometimes has such a powerful effect it can put some people to sleep.  The gentleman sitting directly behind me began to snore.  So that is my only gripe.

The afternoon was filled with my own workshops that I presented back to back.  First off was the Pampered Pagan Pantry, which I must say thank you to everyone that was in attendance.  It was triple of what it was the previous year and I did not have enough materials for everyone to make their own salt or sugar scrub.  Should I submit this class next year I will be prepared for 30+ in attendance so that everyone present will be able to leave the class with something.  I think we may also be out growing Suite 118 as the poor MEC staff member on hand had to carry many chairs into the room to accomodate my guests.  Thank you young man, whomever you are.  You left without me being able to do so in person.  I also think I recognized someone from the Pagan Center that is one of Domestic Witch's YaYa's but not exactly sure.  So if you were there, let me know that I am not out of my mind.  I wanted to say Hi, but then again, I was not sure if you were who I thought you were....next time I will be more brave, tap you on the shoulder and say, Hey don't I know you from somewhere? LOL

After a short break, it was time for my second class of the day, a workshop that I presented for the very first time, "The Pregnant Pagan Priestess".  Though we only had 13 women in the workshop it was more than I would have thought would attend this first time workshop!  Many thanks to all that attended and I am so sorry that we ran out of time.  I am hoping to get my newsletter up and running this year and will send it out prior to each sabbat for ideas on how you can celebrate each Sabbat as a Pregnant Pagan Priestess.  Many thanks to all the women that came to the workshop as well, those that are seasoned Moms and those that are trying to become moms.  I wish everyone the best of luck and MUCH fertility to those who wish it!

Friday night was our pizza party in the KOTH room.  Here is a photo of some of the gang. 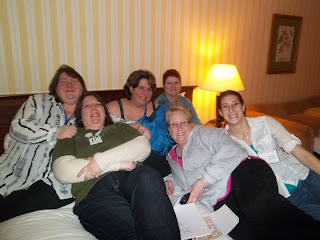 Email ThisBlogThis!Share to TwitterShare to FacebookShare to Pinterest
Labels: Convocation