Thursday morning I woke up excited that this day was the first day of Convocation.  My wonderful inlaws showed up at my home early to get the boys so that way I had a bit more time to pack and prepare for Convocation.  As soon as everything was packed and the car semi-loaded to the brim, my sister and I set out to go get one of our friends from the airport.

Nora was able to fly in without any major problems, but had to deal with her inital drive to her airport in white out conditions and later that evening told us that its not normal for them to have that much snow.  What is normally a 2 hour drive turned into a 6 hour drive just to get to her airport for her first flight.  We then proceeded to the parking garage and then loaded the car up to the brim with all of our luggage and supplies for our workshops. (Mental note: next year take photos of the back seat....oh wait I can take photos on the return trip home. There will most likely be even more stuff from our shopping excursions! LOL)

The GPS decided to take us an alternate route it never took me from the airport to the hotel.  And to make matters more difficult or humorous pending how you looked at it, we had also invited Nora to help with the GPS on her phone to see what it would say.  The two devices could not agree on directions! LOL  One would say it was 7.5 miles and the other would say it was only 7 miles.  Happily, we did make it to the hotel in one piece thru Detroit 5pm traffic in record time!

We got to the hotel where we were greeted by our friends AmethystCat, IbisFire, and Ravenswood.  They along with a nice gentleman named Chance, helped us unload our car and drag everything into the hotel.  (Thanks again ladies and Chance for coming to my rescue!)

We brought items to our room and knowing that Nora had not much to eat, we decided to take our annual night out to Red Robins for Thursday, since we are getting hit by a big storm on Friday.  Good food and laughs were had by all. 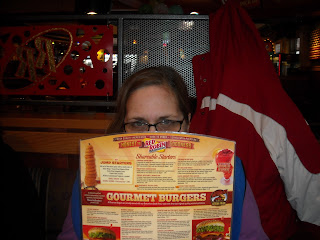 Nora trying to decide what to eat. 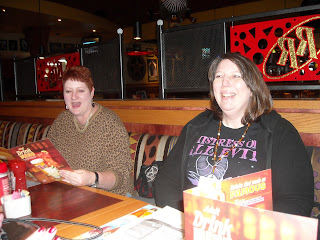 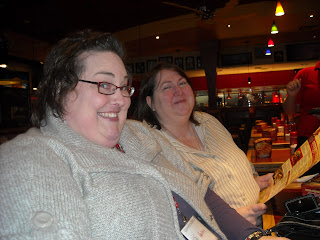 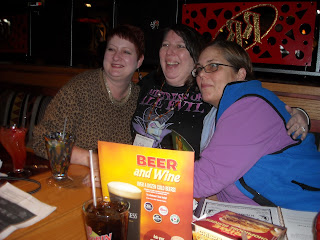 Keep your eyes open and smile pretty for the camera! 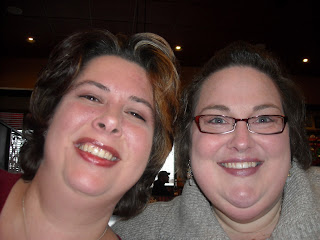 Me and my gal pal IbisFire!
So after dinner we hurried back to the hotel for Opening Ceremonies and Ritual.  As always the MEC crew did not disappoint!  They had a new way of having the people come in and Michael stated he was excited to find a way to incorporate a disco ball into ritual.  They shut off all the lights and the ball acted as a mainframe for shooting stars across the ballroom's ceiling.  We were serenaded by musical acts and it was beautiful.
Afterwards, a few of us went to some evening workshops, much more offered on Thursday night than normal!  Kudos to MEC again!  Nora and I headed to the local grocery store to stock up on supplies before the pending storm that is going to hit on Friday.  Later that evening, it was late night snacks in the KOTH room of Tabouli, hummus and awesomely good pita bread from Taboons thanks to Ravenswood with a ton of their garlic butter!  Oh I was in heaven!  We called it a night shortly after the midnight hour to get some shut eye for our busy day (really today since its Friday morning when I write this) today.
We wiill be going to the Artshow room as soon as it opens at 9am to go and purchase some new goodies my friend Heidi said she crafted and had a limited supply.  Then it is off to the 9:30 morning ritual of Swamp Witchery by Dorothy Morrison and Jacki from Coventry Creations!  We are looking for to having alot of fun today as well as I am presenting two of my three workshops today.﻿
So until later tonight when I blog again, have a wonderful and magical day!
Blessed Be,
Crystal
Posted by Crystal T. at 7:36 AM

Email ThisBlogThis!Share to TwitterShare to FacebookShare to Pinterest
Labels: Convocation