C is for Cherries

Update 2:49pm
So someone emailed me asking why I wrote about Cherries today and what it would possibly have to do with witches.  All I can say is that this person must have been born in the past 20 years (no offense to the younger generation of the craft, after all you are our future).  Well its simple actually.  My first instinct to write about cherries blossomed (ok chessy pun) from one of my favorite movies of all time It came out in the late 80's so that is why I think the person who wrote me is rather young.

There is a scene from this movie that is forever burned into my mind.  I have never been so disgusted and laugh so hard I cried at the same time.

I give you, Witches of Eastwick. 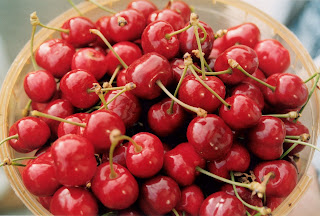 It's been a really rough week this week for me medically.  I have not had the time to try out any new recipes much less do not have access to fresh cherries since they are not in season right now.
Whenever I think about cherries, I think of love and sex.  There is nothing more seductive for me food wise than chocolate covered cherries which seem to be in abundance during the winter weathered holidays such as Yule and Valentines Day.  Every Beltane I enduldge in a bottle of Cherry wine from one of my favorite vineyards here in Michigan (St. Julien's).
Name:  Cherry (Prunus ssp.)
Gender: Feminine and Masculine (I have seen mostly feminine references but one or two masculine)
Element: Air and Water (I have seen it listed as both.  I think it may be due to the intense fragrance as well as the juiciness of the fruit itself that people list it into both categories.)
Planetary Ruler: Venus
Deity: Ambash, Aphrodite, Ares, Artemis, Cupid, Eros, Herne, Mars, Morrigan, Oya, Venus
Properties:  Sexual Energy, Fertility, Love, Playfulness, Psychic Energy, Creativity, Sensitivity, Weather, Hunting, Death, Crossing Over
Chinese Herbalism Gender : Yang (Warm)
Chinese Herbalism Flavor: Sweet
Holidays: No specific Pagan holiday, but there is reference to them being abundant during the Spring and also holds a signifigance to what I call the Summerland. Here in the US there is a National Cherry Blossom Festival held in Washington DC. It takes place March March 20th to April 27th (so this would cover both Ostara as well as Easter for families that are multi-faith like mine). If you reside in Michigan, our annual Cherry Festival held in Traverse City is July 7th to July 14th. It seems many states have their own type of Cherry Festival and they are not held during any specific timeframe consistant to one another.
Divination:  Cherry blossoms can be used to determine Weather patterns. 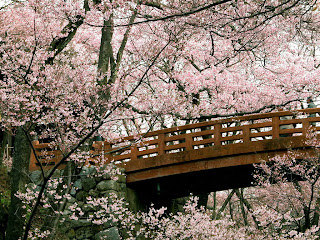 Some facts I have found are:
The cherry blossom was considered to be a sacred plant to Japanese emperors.
Cherries last longer if you leave their steams intact.
Early American colonists used the bark of this plant for a medicinal treatment of bronchitis.
Cherry Blossom Trees are members within the Rose family.
Cherries are thought to aid in energetic and spiritual healing.  There is a Chinese medicine text, Zhen Nan Ben Cao, which states that the consumption of cherries can and will increase the energetic essence of the body also known as Qi.
At the present time I don't have a spell for using Cherries.  I simply like to make them as gifts for Yule or as the food source during my Beltane Ritual for "Cakes and Ale".  The recipe I found from "Taste of Home".  The photo below is theirs as well.   Now if you plan on using this for a Sabbat, it is not a recipe you can just whip out, there are some preparations and time scheduling you will need to do. 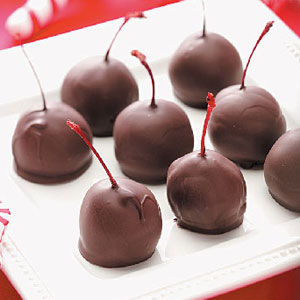