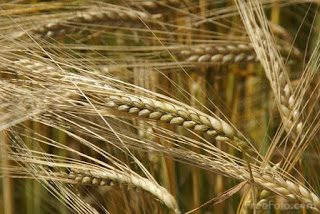 What is magical about Barley?

Barley goes back in time some 12,000 years with it nourishing us in the form of food and drink plus not to mention having the ability to heal humans.  Barley is considered to be one of the seven sacred grains.  There is an old folksong from the British Isles called "John Barleycorn" that sings of the grain's life.  For me, this song is a representation of the Wheel of the Year.  It tells the story of the preparing the ground for planting, sowing of the seed, cultivating the plant, and finally through its time of harvest leading to its death.   For me Barley is a symbol of the Sun King.

Barley is associated to the Heart Chakra.  Barley is a very dense food and therefore very Grounding.  No wonder it's elemental correspondence is that of Earth.  It can be associated in magic by using it in meals for Fertility, Life, Prosperity and Wealth.

I never really thought about barley before.  All I knew about it was that it was a grain and used in some forms of alcohol.  It wasn't until a beautiful Wise Woman J.R. (using initals because I don't have her permission to post) began talking about this grain a few weeks ago wanting to make "real food".  Not the quick cooking kind you get from a box that has been processed, but the good old fashioned kind that came from Gaia's bounty.  The barley that still had its nutrients still fully intact and not stripped away by some processing machine.  So my quest began....

My first stop was at my local Krogers...it took a bit to find it but I did find a small bag of pearled barley.  It did not say it was quick cooking so I got excited and it was fairly inexpensive as well. I picked up two bags one for her and one for myself.  In a few days I would also be venturing to my local Whole Foods, so I was excited that if Kroger's had it, so would WFs.  I was correct, WFs did have it, and it also had two kinds in its Bulk Bins.  First one I seen was the same kind I found at Krogers, small pearl variety.  The second kind I found was a bit more yellow in color and larger in size.  This one was simply labeled Husked Barley. Both were being sold for $1.59 per pound.  Not knowing which kind JR was looking for, I simply took two bags and scooped up a bit of each. Maybe a cup of each.

Did you know that magically, there is a full moon that bares the name Barley?  Yep, there sure is and its during the month of September.  Not only is the Full Moon during September known as the Harvest Moon and or Corn Moon, but to some it is also known as the Barley Moon.  This was during the same month/time of the harvest during the Sabbat of Mabon.   There are also stories from ancient Greece of the Barley Mother and her daughter (aka Demeter and Persephone).

Also barley can be used for divinations.  Alphitomancy is the divination method to determine if someone is lying.   In Chinese herbology, barley is a Yin which is considered cool.  This supports my belief that barley is a grounding food.  No matter if its served to you as a hot meal or ice cold brew, it calms the eater down and helps ground them and cool them.


When you know you will have a busy day (or week) ahead of you, why not try this recipe to provide you with a nourishing hot meal and keep you grounded to accomplish whatever it is you need to do.

When you know things are going to be gnarly,
Go fix yourself a bowl of barley.
It's such a nourishing food,
It will surely put you in a better mood.
Hail to the Gods of Grain,
Let the hectic times wane,
Keeping my emotions sane.

1/2 cup Barley (pearled is ok)
1 Onion, chopped
1 rib celery chopped
1/2 cup of shredded carrots or chopped carrot
1 8oz package of button mushrooms (whole or sliced, choice is yours. I prefer whole chopped)
1 oz of dried mushrooms (I like to use Oyster, Wood's Ear, and Chantrelles.  If you don't want to use dried then you can omit them by adding more white buttons or a large portobella cap in its place).
6-8 ounces of Vegetable broth (adjust liquid to your liking for thickness of the soup, less liquid if you want more of a stew)
1 Tablespoon of tomato paste
1 Tablespoon of Olive Oil
Salt and pepper to taste
1/4 teaspoon of Thyme

First, if you are using dried mushrooms, you will need to soak them in hot water for about 30 minutes.  Reserve 1/2 to 1 cup of the water from draining.

In a saute pan, warm oil over medium heat.  Add onion, celery, and carrot until soft (about 5 minutes).  Put mix into the bottom of a slow cooker.  Next layer the barley and mushrooms.  Place the tbs of tomato paste and thyme then add the vegetable broth and mushroom liquid you reserved to cover the contents.  Add a bit of salt and pepper to taste.  Cover and cook on low heat for 5 to 6 hours.  If the soup is too thick, you can either add more vegetable broth or water to thin it out.  At the final cooking stage, you can also add more salt and pepper to your individual liking.  If you like a bit of heat, then you can also add hot sauce to it as well.  Barley has a very sublte taste to it, so this dish will be more flavored from the mushrooms than the barley.

If you eat meat, you can also add beef or venison to this dish.  I would suggest adding 1lb of meat and layering it above the onion, celery, and carrot and then putting the barley on top of the meat.  You will need to increase your liquid by 1/2 to 1cup.  If you want more of a stew consistancy, you can also increase your barley from 1/2 cup to a full cup.  You want to make sure everything is covered with liquid in the slow cooker prior to cooking.   This meal is also great served with some hot crusty bread to soak up the broth.  Or possibly served in a bread bowl as well.

Happy eating!  Find the magic within your everyday meals!

Sincerely,
Crystal
Posted by Crystal T. at 7:28 AM