Covered in Light invites you to help stop the discrimination.


Due to some very horrid experiences of two of our Sisters, we are planning the first annual Covered in Light International Day for raising awareness about women being discriminated against their right to veil if they choose. On this day, we are asking women to wear a covering of their choice to stand in solidarity and if they feel so inclined, to organize a parade/march in their local area to spread the word.

Unlike Sisters who are forced to cover and are oppressed as a result, our Sisters are often oppressed and discriminated against for choosing to cover their hair in public. One Sister was spat at as she passed by. The very next day, another Sister reported that she'd witnessed and defended two Muslim women from the same treatment while standing outside a public building. Many women don't veil while in public for fear of discrimination. Young girls are harassed at school because of their choice to veil.

We have simply had enough.

Covered in Light is sponsoring the First Annual International Covered in Light Day to show support while standing in solidarity with our veiled Sisters of all religions, beliefs, and personal reasons to cover. Women should be allowed to walk with pride while veiled in public instead of living in fear of discrimination.

This will be a day for men and women to stand together in support of a woman's right to choose, to end hate, stereotypes, and preconceived notions. It is a day to educate the public about the myriad array of women who cover and the reasons why they cover.


Women who veil come from a variety of religious and spiritual traditions including those who are Amish, Buddhist, Catholic, Druze, Eastern Orthodox, Hindi, Jain, Jewish, Mennonite, Muslim, Pagan, Quaker, Sabian, Sikh,Taoist. Women veil for non-religious reasons as well including cancer patients, those suffering from alopecia, women who practice veiling in honour of their spouse, women who prefer to practice modest dress that includes the head scarf, and women who cover for cultural reasons, rather than out of a religious obligation. With this, there are a growing number of women who veil in protest of the sexual objectification of women.

This is about Sisterhood. It is about freedom of choice. It is about respecting the choice women make to veil. We are here to educate and enlighten the world about women of all faiths who choose to don a headscarf, tudung, hijab, tichel, dupatta or any other name that may identify the bit of cloth on a woman's head.

On Friday September 21, 2012 we invite you to take part in this very special event by "putting yourself in their scarves." On this day, wear a headscarf in the style of your choosing with pride in support of the women who choose to veil while protesting against the fear, hate, and discrimination many face.

In celebration of the timeless beauty of the veiled woman, we encourage participants to recreate a famous painting of a veiled woman as a photograph and upload it to the International Covered in Light Day Facebook page.

Find out, if only for one day, what it's like to be "Covered in Light" and support those that already know.

In peace and unity,

The Sisters of Covered In Light

In case you are interested, why YES I am a member! 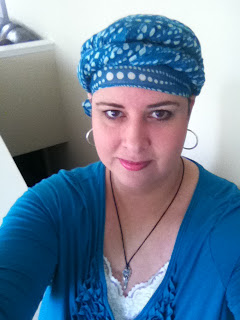