Now you are wondering WTF does Aparagus have to do with the craft right?

This year, one of the ways I am evolving my spirituality is discovering the way food is a gift from Gaia's bounty.  The Goddess does not only nourish us spiritually, but also physically.

Last June I had an eye opening experience that led to a real life wake up call.  I was diagnosed with Kidney disease and even more recently Lupus.  So alot of things have been woken up inside of me including my spiritual side, my physical side, and my mental side.  The Goddess has given me a really hard wake up call and I am listening.  One of those things is how and what I eat.

So with participating in the Pagan Blog Project, I will also be sharing things from my book tentatively titled Gaia's Bounty: Celebrating the Goddess with Food which I am currently writing.  With the Pagan Blog Project's two week per letter of the alphabet, one of those weeks will focus on a food item and its magical properties.

With our first week, here is my first entry:

A is for Asparagus 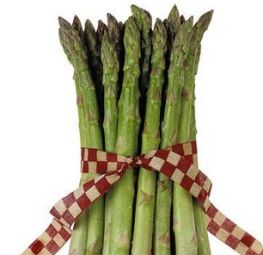 According to the Alchemy Lab's listing, Asparagus has the elemental properties of Water.  It's phallus like shape is definitely representive of the God.  For this reason alone, it was eaten by many Romans and Egyptians because of its shape was thought of as a powerful aphrodisiac.  It is thought that people who wanted to gain a lover, would eat asparagus.  It is also thought that those who had many lovers ate asparagus on a daily basis.

Asparagus is ruled by the planet Mars. It is also thought of having the qualities to represent prosperity since it is considered to be a delicacy and in history eaten by kings such as Louis XIV and Egyptian Pharoahs. If you examine the stalk of it, it is covered with tiny pyramids.  The pyramid is a symbol for prosperity.  You can even make it more powerful by inscribing a money symbol ($) into the stalk near the pyramids for increased prosperity.  Then eating asparagus on a Tuesday is thought to give you more drive towards earning money and possibly becoming sucessful in monetary investments.

Now here is one of my favorite recipes (before my becoming Vegetarian).  At one point in time, I think everyone has heard the phrase "Bring home the bacon" refferring to bringing home money or making more money.  Why not use this phrase to your advantage and let your spellcasting be in the form of making a magical meal for prosperity?

(I obtained the above recipe from Allrecipes.com)


UPDATE:
Since I posted this entry this morning, I have received over 10 emails asking for a Vegetarian alternative.  I don't know why I did not post one earlier becaue I surely do have one.  It's a recipe that me and my friend Kathy created one night with items from my fridge.  Here goes:

Open the can of dough.  Cut each piece of crescent roll into two pieces.  (Can is for 12 rolls).  Take each piece of asparagus and wrap it with a strip of dough.  Place on cooking sheet and follow directions to bake the rolls. (Think it was like 350* for 12 minutes, but could be wrong, get the temperature off the can's instructions).

When done, take out and brush with butter.  Sprinkle on the Cheese.  Then devour.

NOTE:  There was also talk of the possibility of blanching the asparagus ahead of time and also putting the cheese on inside of the dough.  Can experiment with these options as well.  Let us know how it turns out if you do!

Happy Eating and wishing you much Prosperity for 2012!

Blessed Be,
Crystal
Posted by Crystal T. at 5:58 AM